Soft, tender and melt-in-your-mouth delicious…I know it sounds like I’m talking about maybe a fresh-out-of-the-oven cookies but I’m talking about tripe. Tripe, the word either puts a smile on your face or a grimace. It usually does both for me, a smile because I really like tripe. I loved when my mom used to make it. She usually made it on a Saturday or Sunday and it took all day. I loved the warmth coming out of the kitchen. And the grimace on my face is from the smell, it’s not very pleasant and it takes hours to cook. Hours. But it’s all worth it. So when I do make tripe, which isn’t too often, I cook up a large batch and make different recipes with it, last year, I shared a recipe for Chicken & Tripe Stew, so very good. This one is simple and is nice paired with porcini scented rice. Enjoy!

To make your tripe tender, you have to cook it for about 3-4 hours, until you can easily pierce them with a fork. (I did have one rare occasion that they were tender in two hours, so keep an eye on them.) With it still warm enough to be outside, I cooked a big pot of tripe on the range attached to the stove, out on the deck, sparing the house of the smell. Cover the tripe with enough water and bring to a boil, lower the heat and simmer until fork tender. Once cool enough to handle, cut into strips, about 2 inches in length and set aside. You can always cook the tripe one day and the following day make this recipe. To make your tripe in tomato sauce, combine the oil, onions and garlic in a heavy bottomed pot, until translucent. Next, add in the tripe, mushrooms, bouillon cube, tomatoes and basil, bring to a boil and then reduce the heat on the lowest setting, simmering for 2 more hours, stirring often. Season with sea salt if needed and garnish with fresh basil, serves 4-6.

I was lucky enough to live next door to my best friend when I was younger, that had a mom with a golden touch when she cooked. Everything she made was finger-licking good! She even made liver taste good, something that I cringed at. (They told me it was liver afterwards. They called it “steak” and looked at each other suspiciously, lol, I should have known. But they knew me better. I wouldn’t have tried it, had I known.) After eating dinner at home, I would go next door to hang out and her mom insisted that I eat dinner with them. I would half-heartedly explain that I wasn’t hungry, I already ate at home. But the truth was I was always hungry for her cooking. She would talk me into it by telling me she would only give me  ”poquito,” meaning a little bit in Spanish. And was I so happy for that little bit. My sin of gluttony felt heavenly, every-single-bite. One of my favorite dishes she made was “Mondongo”, a stew of tripe, chicken, yucca, plantain and corn. She served it with a creamy wedge of ripe cool avocado and perfectly made white rice, where the rice didn’t stick to each other, every grain retaining its’ shape and a gentle flavor of garlic permeating the grains. What she did, I tried to recreate but it will never be like hers. I’m sure I will be perfecting this over time and sharing round two one day but for now, this is a nice first try. Enjoy! Serves about 4-6 generous portions. 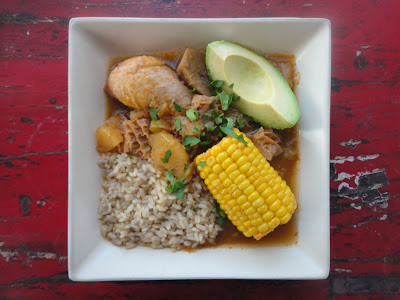 First cook your tripe. (A smelly daunting long process. It really is worth making more at once. And freezing it. Once I cooked down the pound of tripe, it amounted to a small heap and after I snuck a few bites, there was even less of it. So, if you are a tripe lover, you can easily cook more of it to add to your stew.) Cover you tripe with enough cold water (enough to cover by 2 inches, so the tripe pieces float), a little sea salt and bring to a boil on high heat, covered. Once it boils, lower the heat and simmer for 2 hours, covered, occasionally stirring the pot, so the tripe doesn’t stick. Drain your tripe and set aside. In a heavy Dutch oven,  heat your olive oil, onion and garlic on low heat until transparent, add the Sazon packet and stir well. Add in the tripe, water, plantain, yucca, tomato sauce and bring to a boil. Once it boils, lower the heat and simmer covered, for 1 hour. During that time, you want to blister your peppers. To blister you peppers, put them directly on an open flame, on the stove, until the skins blacken. It doesn’t take long. Turn them, so they blacken evenly. Please be careful, use grill tongs, and wear gloves in a well ventillated area. Or you can do this on the grill. Place them in a paper bag to cool. Once cool, peel the skins, remove the seeds and the white membrane. Roughly chop them and blend them in a blender or use a hand immersion blender, until pureed. Once your hour is up, add in your chicken drumsticks, (you can remove the skin if you like) pepper puree, black pepper, sea salt and Vegeta. Simmer this for another hour, on low heat, until the chicken is cooked through. Add in the corn and cilantro for about 10 minutes until the corn is cooked through and the stew is equally hot. Adjust the seasoning as needed. Serve with  rice, a wedge of avocado and fresh cilantro or parsley in this case. Serves about 4-6.