It’s that time of year where red, white and blue is everywhere with the fourth of July right around the corner. If you aren’t hosting a barbecue, you most likely going to one. And this is a great dish to bring or to have on the table, as it’s tasty at all temperatures. I thought the potatoes came out nice on their own but then I paired them with tomatoes sauteed in butter with slivers of garlic and fresh lemon thyme leaves and then it became extra special. It’s not only nice to have on the fourth, but great for a light lunch with a green salad or part of a brunch…or a midnight night. It’s good at all times…Enjoy!

In a saucepan, combine the goat cheese and heavy cream. On low heat, whisk the cheese and the cream together until blended. It takes about five minutes. Allow the mixture to cool and add in the yogurt, pepper and the lemon thyme leaves. Set aside. In a 8×8 square baking pan, (a heavy bottomed one works best) take a tablespoon of the butter and grease the pan. Begin layering the potatoes, alternating between the gold and the blue, gently salting in between layers. After you have four layers, about half of your potatoes, spread a thin layer of half the cheese and cream mixture on the potatoes, along with the rest of the butter, broken up. Continue layering, topping the potatoes with the cheese and cream mixture. Bake in a pre-heated oven for 1 hour at 375 degrees, until brown on top. Makes 9 squares.

Can you find the spot where I snuck off a perfectly crisp blue potato? I couldn’t resist! (lol)

Herbed goat cheese bites rolled in pistachio crumbs are such a nice way to start an Easter dinner. I love these! I love starting meals with a cheese platter but come spring time, cheese can be a little heavy. But goat cheese is the exception, being the perfect cheese for spring, light, creamy and tangy. Combine with your favorite herbs and it’s a special way to start a meal. These are also nice tossed into a spring mix salad with a balsamic vinaigrette. Enjoy! 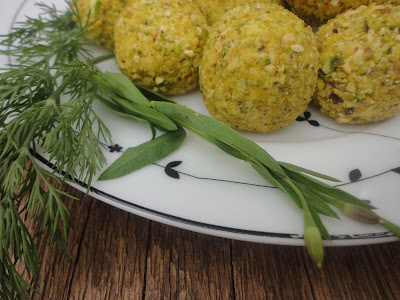 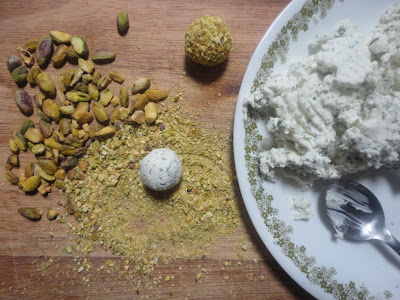 Using a fork, combine the cheese, herbs, pepper and salt. Adjust the seasoning accordingly, adding more salt or pepper as needed. Feel free to add in any fresh herbs that you like, including parsley or mint. Scoop into heaping teaspoon size mounds and then roll into smooth balls. Using a hand chopper or food processor, make your pistachio crumbs. Roll the goat cheese balls into your pistachio crumbs. Serve right away or chill if making them ahead of time. Makes 17. Enjoy! 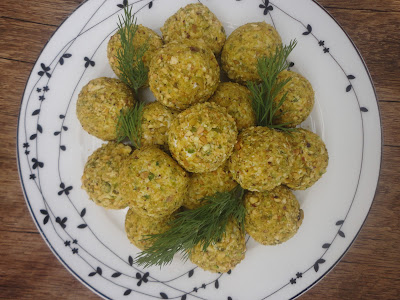 Mushrooms, how do I love thee, let me count the ways…and this is one of them. This is going to sound a little strange but I was really in the mood for a cheese steak sandwich but didn’t have the steak or the rolls. lol So I tried to translate those flavors into a pasta dish using portabella mushrooms for the meatiness and goat cheese for the cheese factor. And I’m not going to say I hit the nail on the head, lol but I will say this dish was decadent and delicious and if you are a mushroom lover and are celebrating goat cheese month

, you will enjoy this dish!

In a Dutch oven, combine the butter, olive oil and the garlic. Let it saute over low heat until the garlic is soft. Add in the mushrooms, pepper, tomato and season with a little salt, saute on low heat for half an hour on low heat. The liquids will release so increase the heat on high for about five minutes until the liquid reduces. Keep an eye on it and stir if needed because it can easily burn. After it reduces stir in the goat cheese and the heavy cream. Stir until the goat cheese has melted into the sauce and is warmed through. Season with sea salt if needed and fresh ground pepper and stir in the cooked pasta. Serve this right away, nice and hot! Serves four. 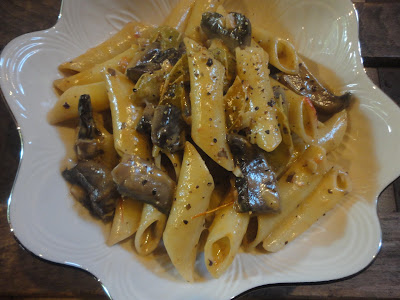 August is National Goat Cheese month! Yay! And we are celebrating it by putting it on the grill! I saw these cool “maple grilling planks” by the cheese section and I was really intrigued and had to try them out with the goat cheese! This was really fun and I look forward to grilling more cheeses in the future! The end result is a delicious, slightly smoky, warm and easily spreadable cheese. It was just so good, if you are a goat cheese lover, you will really enjoy this recipe! 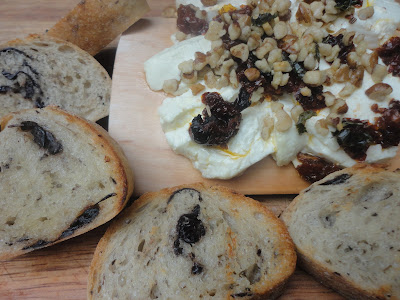 Preheat your grill to about 350 degrees. I got my grill too hot which I think contributed to the plank curling at the edges a bit. So try to keep your grill at the lower temperature. The two recipes on the package for planked brie and planked cheddar all grilled at 350 degrees. I was just so excited to get the cheese on the grill, (and off) lol. Put your soaked plank on the grill  for about 3 minutes. Flip and using your tongs, take it off the grill so you can top your plank with the goat cheese, sun dried tomatoes, chopped basil and chopped walnuts. Drizzle with a little bit of olive oil. Using your tongs place it back on the grill. Grill for about ten minutes until the cheese is nice and soft and you see the sun dried tomatoes beginning to brown a little. On the side of the plank, grill your slices of bread and enjoy together.  Happy goat cheese enjoying weekend everyone! ;) 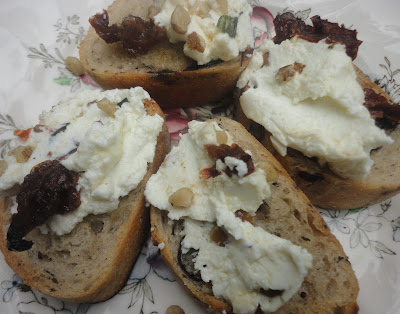 Summer and salads go together. This is a nice salad to pack for a picnic in the park. Just pack everything separately and pour the dressing over the greens when it’s time to eat. Then lay back on your blanket with your honey and watch the clouds as the pass by. Happy picnicking!

Heat the canola oil, (enough to fry the chicken breasts in) in a non-stick pan. Combine the panko bread crumbs, pistachio nuts and the parsley. Dip your chicken breasts into the egg then into the breading. Really pack on the breading with your fingertips. Once your oil is nice and hot on low heat, you can put in your chicken breasts. I test the hotness of the oil by throwing in a few panko crumbs, once it sizzles your oil is ready for the chicken. Fry the chicken for ten minutes each side and drain on paper towels. Combine the olive oil, shallots, vinegar and the raspberry preserves and toss with the arugula. Season with salt and pepper if needed. When you are ready to make your salad, serve the chicken with the arugula and crumble the goat cheese on top along with a pretty nasturtium flower. To keep your chicken crisp for your picnic, let your chicken cool completely, then wrap in paper towels and place in a paper bag. This serves 2. Enjoy! 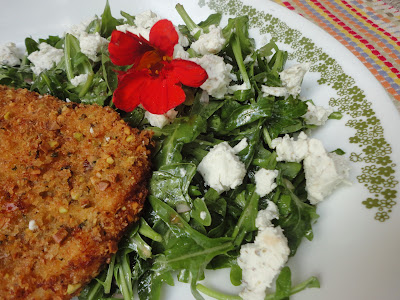 I LOVE purple potatoes! They are so strikingly beautiful! I’m amazed by nature every time I see them! If you love potatoes, beets, goat cheese and sweet glazed pecans, you’ll really enjoy this salad. I made a small simple green salad to go with it, and it is a nice contrast in color and in flavor. Roasted chicken would be great with this also. Enjoy the colors and flavors! 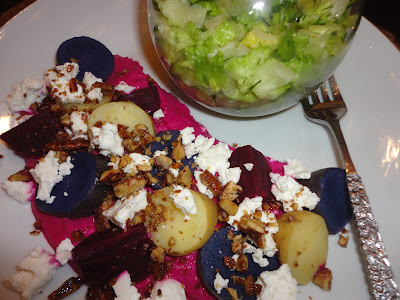 Chop the medium sized beet and blend with sour cream and heavy cream. (I used a hand blender.) Season with salt and pepper. Spread on your plate. Roughly chop the small beet and the potatoes and arrange them over the beet dressing. Top with the crumbled goat cheese and the crushed glazed pecans. (I used to make my own using pancake syrup but the ready-made glazed nuts are great and convenient.) Combine the chopped greens, (you don’t have to use Boston lettuce, any mild lettuce will do) the dill, olive oil, lemon juice, salt and pepper. This makes one serving, so you can double, or triple it as you need. 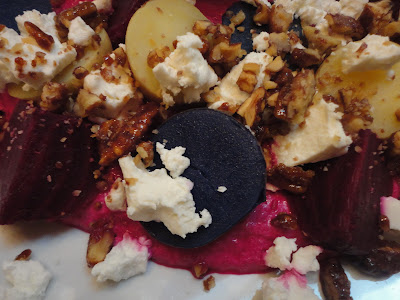 Parsley, dill, Belgian endive, goat cheese…pistachio nuts…What’s not to love? Especially when combined in a salad?  And I think it’s such a pretty salad too! The Belgium endive frames the plate, and the best part, you can use the leaves to scoop the salad up. Visions of hot summer days, sweet sticky barbecued chicken wings and this salad are dancing in my head. lol All fun finger food! Can’t wait! But as of now, it’s a chilly night and this salad is a nice break from all the indulgences lately! Here’s the list of goodies…

Trim the bottoms of the endive, remove the largest leaves and form them in a circle around a plate. In a large bowl, combine the rest of the endive, (chopped into small pieces) the radicchio, the parsley and the dill. In a separate bowl, combine the shallot, olive oil, juice of the lemon, red wine vinegar, honey, fig marmalade, salt and pepper. Pour the salad dressing over the herbs and lettuces and combine well. Take your salad and pile it in the center of the plate. Top with your goat cheese and chopped pistachio nuts and enjoy! 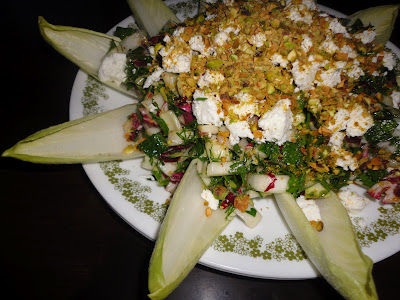